Indecision is the worst trait you can find in a startup founder. Actually, it's the worst trait you can find in anyone tasked with leading or shaping the direction of any company or project. Indecision, is simply delaying the making of a decision. Sounds reasonably obvious when you say it out load, but what isn't obvious is the implications of delaying a decision. Delaying a decision is effectively delaying work. Being indecisive is therefore no better than procrastination. Both are a barrier to getting things done. It doesn't matter whether you're running a startup, or just deciding on what to eat for lunch, indecision just makes things worse. Right now you may be stuck deciding what to eat, but in an hour's time your lunch break is over and you're bloody starving. Better to suck it up now and just have the damned noodles.

People are indecisive out of fear of making a bad decision. The logic goes that by delaying the decision, I can gather more information and then have a more informed opinion later. The information they're waiting for is really just something to either make them feel more secure in what they've already decided, or something to sway them away from something they don't want to decide. Either way, more information is unlikely to help. If you're in a position where you need to make a call now; make the call now. Looking at the menu for another ten minutes isn't going to make the noodles taste any better.

The absolute worst case is the person who delays a decision until it gets to a point that it simply becomes someone else's decision. If you meet someone like this, run the other way...especially if they're leading a team you're in. I've found myself in a position a couple of times where I've relied on someone above me in a company to make tough decisions.  In many cases the person just went on holiday, or avoided me for a week just to avoid the inevitable discussion, decision and implications. In the end, the hard tasks just fall to someone else often ill equipped to deal them. This lack of confidence in one's ability to make difficult decisions makes for poor leaders and, consequently, poor teams.

There are many reasonable sounding excuses for delays in decision making. Gathering information is one such reason and is often necessitous when making a decision. The danger in gathering too much information is when the information is being gathered simply to confirm a well known hypothesis. If it looks like someone in your team isn't pulling their weight, there is little point gathering evidence to confirm the fact. If they're not up to scratch, show them the door. The opposite case is the search for information to avoid a difficult, but necessary, choice. The reality is that if you look hard enough you can find information to confirm just about anything you like. Giving someone the opportunity to do so just gives them a chance to put weight behind a decision that everyone knows is wrong.

Another reason for indecision is when there doesn't appear to be a good option. Sometimes you're faced with a situation where you have two choices, and they're both bad. The natural inclination of most people is to simply delay making a decision in the hope that a better option comes along. Of course it's possible, but if a better option doesn't surface, you've likely left yourself with the same two choices you started with...except now you're a month poorer as well. Sometimes you just have to play the cards you're dealt.

Some time ago I watched a great video on youtube about indecision and inaction over global warming. The premise of the video is that we can act or not act, and global warming could be true or not true. There are therefore 4 possible outcomes, the best case being we act on global warming and it turns out to be true, and the worst case is that we don't act and it also turns out to be true. The interesting part about the video in this context, is arriving at how to decide if you should act..

Imagine we're provided with a situation where we may or may not have a major problem in our software; we'll use the infamous Y2K bug as an example. If we spend a heap of money investigating if our software is affected and it IS then we're all thrilled that we avoided disaster. Good decision! If it turns out that we weren't affected...well at least we know! That's still pretty good....even if it did cost us a truck load of time and money.

Now, let's imagine we didn't do anything. NYE rocks around and we're out partying the night away. Barry, our sysadmin calls us at midnight with the news. If everything is ok we all high-five each other and get on with the partying. If, on the other hand, all of our software is now dead, banks are going belly up, planes are crashing, toasters are exploding...well...we'd probably be in a really bad place. Here's a handy little chart with the possible outcomes from a situation like this. 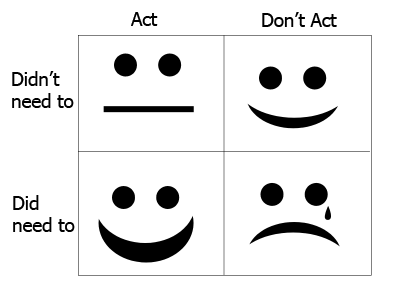 In essence, when you have an unknown outcome it's always better to act than it is to not act. If you don't act and things go bad, they can go really bad. So what's this got to do with indecision? Well, indecision is the same as not acting. By not making a decision, you're in effect choosing the "don't act" column. By not acting, you're rolling the dice and hoping for the best, you're giving up any say in the matter, you're relinquishing control to some external power, you're crossing your fingers and toes. This isn't the way to deal with global warming, and it isn't the right way to run your business. If you have control, use it.

Difficult situations don't disappear. They just get worse. If you've got a bad employee causing problems, delaying the hard decision to give him the boot just increases the chances of him affecting those around him. If your website is losing you money, delaying the decision to pull the pin will just cost you even more. Decide early, and act swiftly.

So what's the worst that can happen if you make the wrong decision? The fact that you decided to do it means that it was the right decision at the time with the information you had. So it only became a bad decision when unknowns surfaced, or when something changed. When that happens, you simply make a new decision. That may be that you alter what you were doing slightly, or it may be that you scrap it in favour of a new path. Either way, by making a decision you forced an outcome. If you hadn't acted, those unknowns would still be unknown. By making decisions constantly based on the information available, you uncover newer information more quickly. Inaction rarely provides anything actionable.

Very rarely, you can make a call which turns out so horribly wrong that you wonder how you could ever have made such a stupid mistake. When this happens, talk it out. If your customers are pissed at you, get on the phone, email, twitter and talk to them. Apologise for your mistake and ask what you can do to make it better. If you broke something, let people know, and get help to fix it. It is highly unlikely that you'll ever make a mistake that you can't recover from. Put you hand up, own the error and start talking about how to fix it. Taking actions sometimes means taking risks, but without taking risks you will never achieve something great.

So when you're faced with a decision, look at your options, talk it over, experiment, research and ponder...but when you're done, make a decision. The sooner you get moving, the sooner you find out if you were right or not. The earlier you act, the more choices you will likely have available. Leave your decisions until the last minute, and you'll often find the options have dwindled significantly.

It's the first question you'll be asked whenever you ask an investor for money, or if you're just doing SWOT analysis of your own product. It's also the first question you should ask yourself when you have that first great stroke of inspiration. The usual question is, "What would you do if Google copied your app?".