It's been a long time since we've posted an update, and for that we're sorry. We're not dead, we've just been busy elsewhere. Matt and I (Alan) have been working full time on a bug tracking app for web designers and digital agencies called BugHerd. BugHerd is a visual bug tracker for websites, like sticky notes for HTML. Things have been going awesome at BugHerd, and whilst we always had the intention of coming back to UsabilityHub and Five Second Test, it was becoming more and more clear that we were just never going to be able to.

So a while back we made a decision to get some help.

We'd like to introduce you to Nick and Tristan (You may have already used their app - the time tracking and invoicing app, Paydirt). They've been working hard rebuilding UsabilityHub from the ground up. They've made a lot of improvements already, but there are a lot more changes and features coming soon. We'll be launching the new version into beta in the coming weeks. If you're interested in trying it out shoot an email to [email protected] and we'll get you set up as soon as it's ready to go. As a treat, here's a look at the new dashboard currently in development (full design not implemented yet...this is just a sneak peek): 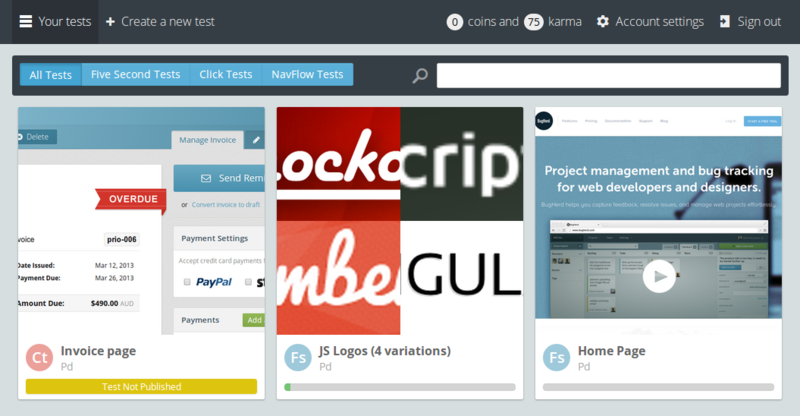 Once the new app is ready to roll, we will be shutting down the old app. This means two things:

1. Where possible your tests will be migrated to the new system. If for some reason we're unable to migrate all of your tests, we'll give you plenty of opportunity to get the data you need before we move to the new version. We don't expect there to be any problems, but because it's an entirely new system some tests may not make the journey.

2. As everything is new (including the database), you'll be asked to reset your password. It will be a simple matter of using the "reset password" functionality to choose a new password. If you can't remember what email address you used to sign up, just shoot us an email to [email protected] and we'll help you out.

I hope you're as excited about this huge new release as we are. Once again, I'd like to apologise for the silence of the past little while... it's not that we don't love you, it's just we bit off more than we could chew :)

Thanks for all your support and enthusiasm over the past few years, and here's looking forward to the next few!